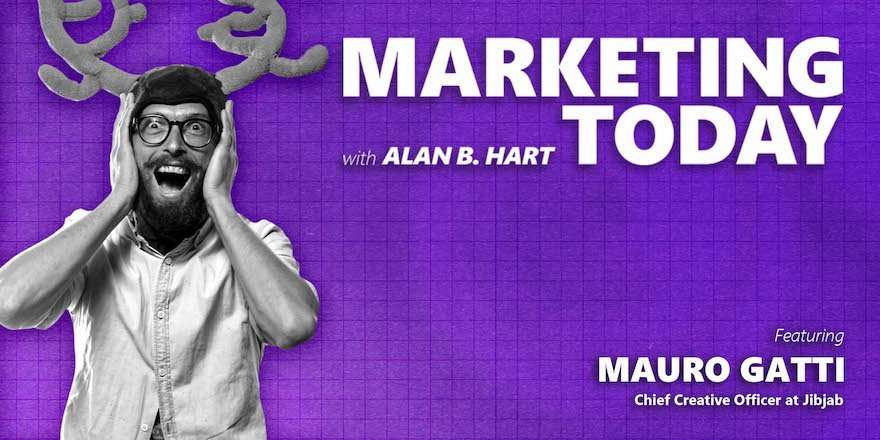 On this 245th episode of “Marketing Today,” host Alan Hart speaks with Mauro Gatti, the chief creative officer at JibJab. Gatti is driven by his love for creativity and a desire to use that creativity to make the world a better place for all living beings that call this planet home.

We start our conversation by diving into Gatti’s life growing up in Northern Italy, an area full of workaholics, where he began working in his uncle’s butcher shop as a 10-year-old boy. Though he grew up in a small town, Gatti believes that “the best part of Italy is the drive between different cities because there are so many different gems” and “driving around is a great way to discover the real soul of Italy.”

Gatti then discusses his meteoric rise in the creative advertising industry that took him from creating artwork for CDs in Italy to his current position as the chief creative officer for JibJab in Los Angeles, California. “We all have a gift. Maradona had that gift, Michael Angelo had that gift,” and Gatti’s gift is being a creative person. JibJab believes that “creativity can inspire and mobilize people,” an important concept in a year that has brought the world to a halt.

Gatti also discusses The Happy Broadcast project in which he does his best to promote the good things that are happening in the world while media outlets seem only to promote the bad. “The challenge is not to erase the past; it’s just to create a new present!”

previous244: Premium Brands and Business Marketing with AMEX’s Clayton Ruebensaal
next246: How Being Yourself Makes You a Better Leader with author Minter Dial
Tags:creativityHappinessHumorItalyJibJabMauro GattiStory BotsThe Happy Broadcast